Today we are starting a series of interesting interviews with some of the great people who helped us bring Rigid Force Redux to consoles. Let’s start with Natalie Hitzel! Natalie is a professional voice actress from the US. In Rigid Force Redux she lends her voice to Psye, your helpful AI companion on your mission to save the galaxy! 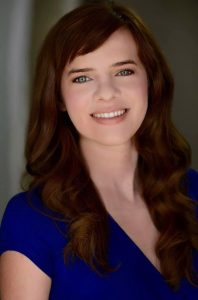 Q: Natalie, first of all thanks for giving us this interview. Initially, please talk a little about yourself and your work.

A: Thank you so much for inviting me to do this interview. I adore this company. I am a voice actress. I mainly specialize in games, toys, animation, children’s e-learning and commercials. I decided to pursue this incredible career after working behind the scenes on my dad’s radio show, and due to my love for gaming and animation.

I’m also a big-time gamer and animal lover. I love getting on Xbox live with my best friends and going to Super Smash Bros parties. I volunteer whenever I can at a local animal shelter, and I hope to some day have a fostering program for cats that need socialization and a second chance.

Until then, I have a cat named Stitch, who really owns me more than I own him. I also immensely enjoy hot tubs.

Q: How did the opportunity to work on Rigid Force Redux come about?
A: I was very much at the beginning of my career. I had just finished creating my first character voice over demo. I coached for that demo at Edge Studio with the incredible Kara Edwards, voice actress known for Dragon Ball and Smite. I was excited to share the new demo on social media, and praise the excellent work that Kara did on writing it and helping me develop those characters.

It made it’s way through the social media mainframe, over to com8com1. They heard the demo and contacted me to talk about potentially voicing an AI character in their new side-scrolling shoot em up, Rigid Force Alpha.

I am a huge Halo and Geometry Wars fan, and the graphics and sound effects immediately gave me a massive dose of nostalgia. Needless to say, I was super happy and excited to work with this incredible team, and on my first title.

After RFA has been released and the game achieved so much success, com8com1 emailed me about bringing the game series to consoles together with Headup Games. I was lucky to be able to bring the voice of Psye to the new titles, Rigid Force Redux!

Q: How do you like the brand-new look of Psye compared to the 2018 PC version?
A: Old Psye had a more mature and serious look. She definitely looked the part of your typical AI. I LOVE the new Psye. She immediately gave me Xenoblade 2 vibes. I love cartoony styles and she definitely matches the color scheme and vivid, techno vibes that Rigid Force Redux has been giving me.

“Voice over is still acting. Think about why a character exists.” 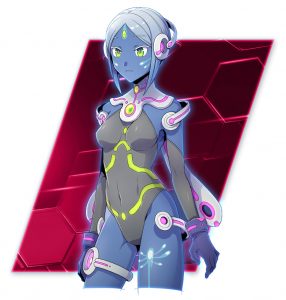 Q: How do you generally get into a character? How do you prepare for a new role?
A: I was fortunate to study acting with one of the best coaches that anyone could ask for. Deborah Bradshaw taught us so much about purposeful physical movement, scene study and improv. Voice over is still acting. Think about why a character exists. What is their goal? How do the people around them react to their actions? How do you immediately feel about that character?

Q: What’s your studio setup like?
A: Oof I guess you want me to nerd out! I have a Sennheiser MK4 xlr microphone. My interface is the Steinberg ur22. My brother, his best friend and I custom built a computer that can handle days and days of recording and storing audio. It’s also completely silent.

I built myself a whisper room, with sound-treated walls and a monitor to edit audio and control my digital audio workstation. A lot of this equipment was recommended to me and approve by an audio engineer that I met at Edge Studio, so I’m pretty darn proud of it!

Q: Which games have you worked on so far? Have you also had jobs outside the gaming industry?
A: RFA was my first title. I worked on a game with Tunnel Vision Games, called Lightmatter. I voiced a really interesting character named Ellen, and got to work alongside the legendary David Bateson, of the Hitman series. So that will always be an unforgettable experience.

I voiced a few other AI character for games such as Starport Delta, Cepheus Protocol and Tank Warz. I also got the chance to voice an adorable little girl named Paige, in GameHouse’s mobile game, Delicious Bed & Breakfast. I’ve also had the opportunity to do some really fun voice over work for many commercials, including a new national campaign for Opel, a German car company.

I have recently had a lot of amazing experiences with voicing toys and children’s e-learning content, and I hope to explore a lot more in those areas.

“Be open-minded about the different genres in the voice over industry. Never stop researching or coaching!”

Q: Do you have any tips for people who want to become professional voice actors?
A: It starts with acting! Join community theater, take as many improv classes as you can, practice cold-reading and if you want to pursue voice acting in the gaming industry, play video games! Understand the process of progressing through a game, and listen to character dialogue. Be open-minded about the different genres in the voice over industry. Never stop researching or coaching!

Q: Being a console gamer yourself, what are you playing at the moment?
A: Oh soooo many games. On the Xbox One, my personal favorite is Ark Survival Evolved. My best friends and I are so hardcore about progressing with our characters, exploring and building new settlements. I also enjoy Apex Legends, Ori and the Blind Forest and I’m just picking up Rime for the first time.

On the Switch, I’m playing Luigi’s Mansion 3, Super Smash Bros Ultimate with my friends, Marble It Up and from my all-time favorite video game series, Zelda Breath of the Wild. ❤

subtitle goes here
Thank you Natalie for taking this interview! If you would like to see more of her work, check out Natalie’s website: www.nataliehitzel.com
22 likes
Share

Instagram did not return a 200.
We use cookies on our website to give you the most relevant experience by remembering your preferences and repeat visits. By clicking “Accept All”, you consent to the use of ALL the cookies. However, you may visit "Cookie Settings" to provide a controlled consent.
Cookie SettingsAccept All
Manage consent

This website uses cookies to improve your experience while you navigate through the website. Out of these, the cookies that are categorized as necessary are stored on your browser as they are essential for the working of basic functionalities of the website. We also use third-party cookies that help us analyze and understand how you use this website. These cookies will be stored in your browser only with your consent. You also have the option to opt-out of these cookies. But opting out of some of these cookies may affect your browsing experience.
Necessary Always Enabled
Necessary cookies are absolutely essential for the website to function properly. These cookies ensure basic functionalities and security features of the website, anonymously.
Functional
Functional cookies help to perform certain functionalities like sharing the content of the website on social media platforms, collect feedbacks, and other third-party features.
Performance
Performance cookies are used to understand and analyze the key performance indexes of the website which helps in delivering a better user experience for the visitors.
Analytics
Analytical cookies are used to understand how visitors interact with the website. These cookies help provide information on metrics the number of visitors, bounce rate, traffic source, etc.
Advertisement
Advertisement cookies are used to provide visitors with relevant ads and marketing campaigns. These cookies track visitors across websites and collect information to provide customized ads.
Others
Other uncategorized cookies are those that are being analyzed and have not been classified into a category as yet.
SAVE & ACCEPT